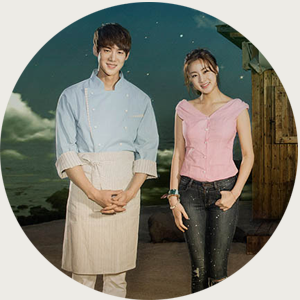 ” It’s not the most exciting first hour of a show ever, and perhaps it could have been bolstered by a heavier dose of plot, but this is a drama I’m watching for mood and feeling, and the show gives me a pleasant and happy feeling, both at the cuteness in front of me and the promise of a sweet romance down the line”.

“The poor girl/rich boy narrative is a common K-drama theme, but the Hongs really have a way of making the little things highlight the reality of that dynamic.”.

“I love Jung Joo’s character. At first, she didn’t resonate much to me. But when her world suddenly came crumbling down, I saw a woman courageous enough to keep trudging on”.

“Tying the introductory sequence of the drama in a pretty ribbon and appearing frequently throughout the first two episodes is the evolution of Geon-woo and Jung-joo’s level of familiarity and carefree chemistry after they find out that they aren’t in fact siblings with one another”.

” But, yes, the mayor was way more attractive than Yoo Yeon Seok’s Gun Woo, who had little to recommend him from beginning to end. He started out as a self-involved jerk, moved on to confused jerk, turned into a noble idiot, and then went nowhere. Much like the story.”

“Warm and Cozy gives what the title says. It’s a nice drama of its gender and despite the small faults, I recommend it to the romance holic drama people”.

“ Warm and Cozy gives us noble idiocy disguised as innocence, mixed with formulaic episodes — and it just doesn’t work. There’s no doubt why: it quickly became repetitive, boring, and dull“.

“I suppose Warm and Cozy isn’t a drama for everyone but if you happen to be a sentimental sap or a die-hard fan of the Hong Sisters like I am, you’re probably going to enjoy this one“.

“(…) it’s because I respect the Hong Sisters so much that I rated it poorly as I feel like we deserve a better class of drama as their fan”.

“(…) my verdict after the two episodes is that we need to wait a little bit before we judge the whole show. For not, it just needs to work a little more on its base”.

cali@diary of a k-drama addict:

“I have to say, Warm and Cozy is more like Best Love, or even Big, tonally, based on the first episode. There’s not much that happened, which is why some people think it’s boring“.

“First thing first: if you are going for Warm And Cozy for some deep, complex plot, you’ll be disappointed. But if you want to delve into a story which is warm, soothing, sweet about two people who are so different and yet so same, then this drama is for you”.

“I am content to just sit back and look at the pretty scenery and watch Gun Woo and Jung Joo fall in love. Is that too much to ask?”

“In the meantime I just want more Jeju. It’s like going to the spa!”.

“The first two episodes were easy going and I love the characters already ❤ Not to mentioned that it’s filmed in Jeju Island – and I just love everything.”.

” I am not completely sold yet, but Warm and Cozy certainly seems to have potential. I am enjoying the trademark Hong sister dialog between the two leads and while I kinda miss the “cold and misunderstood” hero that Hong sisters are so good at creating I am liking the warm and loving Gun Woo as well”.

“This first week took a bit of adjusting to get used to all of the tourism asides, but I think we’ve got a solid first step into a sweeter, quieter romance”.

“Now I realize that it takes a while or to be precise, at least 3 episodes for me to be able to appreciate the drama Hong sisters write.”

“‘”Warm and Cozy” is an attempt to go back. Back to what made romantic comedy in Korean drama relaxing, fun and simple”.

“Can we skip to the part where they both start going out? :D”.

First impressions (up to episode 06)